It is hard not to warm to Jonathan Portman, who has few rivals when it comes to clean one-liners among his training counterparts.

“Good man and a good trainer,” someone remarked to me over the weekend, but I certainly didn’t need telling that and recent results have underlined the second part of the statement.

Enochdhu had been brought along in typically steady fashion by the trainer before winning at Windsor last Monday. Then came a 16-1 success for Knight’s Gambit at Brighton 24 hours later, before a much bigger success at Newmarket’s Future Champions Festival, when Rumstar landed the Cornwallis Stakes on Friday.

All of which should have come in handy for a regional correspondent in with a squeak in the Racing Post naps competition, especially as I had floated the Cornwallis to Portman after the colt’s victory at Glorious Goodwood in the summer.

I had done that because Portman won the Newmarket Group 3 in 2014 with Royal Razalma and two years later with the money-spinning Mrs Danvers, whose exploits made that campaign the yard’s most lucrative. Alas, my mythical pounds were placed elsewhere.

Rumstar’s victory took Portman to 28 winners for the year and within five of the personal best of 33 he recorded in 2018. After Enochdhu’s win he had suggested he “might be up against” matching that haul before January 1, but it is closer in sight now. And it is a further indication of how well this season has panned out that Portman is £40,000 in front of his best ever prize-money total.

He might never admit it outwardly, but expect Portman, laid-back by nature, to be bang up for the challenge of also securing his personal best total in terms of winners, especially at a time he has been voicing his fears for the future.

“I’ve had four owners die this year and I know two more are planning on it!” he said in his customary dry manner, and therein lies a potential problem for Portman, who admits he lacks the bravado of fellow trainers to splash out on young stock on spec and then charm owners into parting with their cash.

“I’d just worry the horse might not be as good as I thought it would be or sold it to be,” the trainer, who has been in business since 1998, once mused.

But whether he wants to shout it from the rooftops or not, the results speak for themselves and they’ve been pretty good. Then again, Jonathan Portman is a good trainer, remember. 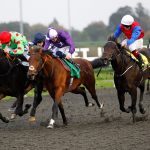