The 2017 flat season was never going to be as rewarding as 2016 with our stable star Mrs Danvers taking time out and the lack of a similar replacement but we are nonetheless proud of our achievements in what has been a challenging year.

5yo mare Ickymasho (Messrs Lambourne, Forbes and Losse) won us three races and finished second twice. She gave us a marvellous day in the sun at Deauville in July when finishing a very close third in the Listed Prix De la Colonne.
A long held plan to win the veterans sprint at Goodwood came off triumphantly when 10 year old Joe Packet obliged. This was his eighth career win and he has had his issues along the way. He excels at home as lead horse to the likes of Mrs Danvers.

Mancini (Laurence Bellman) and Ashazuri ( RWH P’ship) kept the three year olds in the winners enclosure.
Of the 30 two year olds here less than half of them were forward enough to run. Of those that were Show Of Force (Sawgrass Survivors), Groundnut (Jennifer and David Powell) and Indiscretion (Turf Club 2016) were winners and several others were placed.

We look forward to 2018 with some extra determination to reproduce some more headline acts. Please visit our Horses For Sale page to see how to get involved. 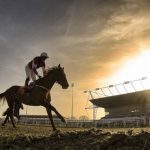