Review of the turf season 2016

With the turf season now over we take stock on our season. We have won our owners close on £290k in prizemoney which is a personal best. Our tally of winners did not quite reach our target of 20 but there are still several weeks of the year left for that to be achieved.

Star turn this year has been 2yo filly Mrs Danvers. The £1k vendor buy back who ended her season unbeaten after 5 races including the Weatherbys Supersprint, Listed St Hughes Stks and Group 3 Cornwallis Stakes. She has been great for advertising the stable with appearances in broadsheet newspapers and primetime television news items. We are very grateful to the Burtons, her breeders, for sending her to us and to Turf Club 2014 for leasing her from them. She has been nominated by the Racehorse Owners Association for a Special Achievement award and that makes all of us here immensely proud.

Maybelater was consistently placed at Listed level and was able to go off to stud with well earned black type. Ickymasho has also been most consistent, winning three handicaps and being placed several times. Balmoral Castle romped home with an Ascot apprentice handicap but the handicapper took a dim view which gave the rest of his season a downer.

From the three year old crop Poster Girl was our big hope but she had minor issues and is now heading to USA for new owners and it would be no surprise if she found her niche there. Intimately has won two races this year for one of our popular racing syndicates Whitcoombe Park Racing. Equistar has also won two handicaps as has bargain buy Genuine Approval.

Of the two year olds Mrs Danvers was a first time out winner. As was Gill Habershon-Butcher’s Balgair. The majority though have been in need of more time and many have not run at at all. Mrs Danvers‘ subsequent triumphs made up for that though!

Balgair was ridden that day by popular jockey Freddy Tyliki who just before the end of the season was semi paralysed in a race fall which was such devastating news to us and the wider racing public. Such an asset on any horse in any race and a great communicator. We wish him well.

The stable was also very sad to say good bye to 6 year old Pasaka Boy. He has been part of the furniture here since winning first time out as a 2yo in 2012. He went on to win us five races and £75k including a handicap at Epsom on Derby Day. He was placed in the Listed Lingfield Derby Trial. In 2014 he sustained a complicated, life threatening pastern fracture but returned to training for this season. He managed a third place but jockey feedback was that he felt far from comfortable and a shadow of his former self. Hence it was a surprise and sadness that his owners RWH Partnership chose not to retire him but to switch him to a NH trainer for a hurdling campaign. We wish our much missed friend well in that job.

We have been restocking with yearlings and from what we have seen of them so far excitement is already high for 2017 and all that it may bring, so please either stick with us or join in for that! In the meantime we thank all our current owners for making 2016 a success and our loyal staff also. 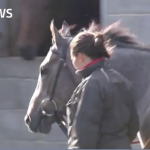